This traditional American holiday is centered on a myth of the Puritan settlers in New England.  It is a celebration of the harvest, of survival in a new world, and of friendship between the settlers and the First People.  Thanksgiving became an American tradition only during the American Civil War (c 1863) and a Federal holiday as America began to emerge from the Great Depression and on the eve of our entry into World War II (1941).

The traditional foods of this celebration are indeed largely from the Americas:  Turkey, sweet potatoes, pumpkin and cranberries.  But there is much more to the story.

The early settlers were certainly not castaways although they did face extreme conditions, a new climate, and had much to learn in order to survive.  The Pilgrims came on a small ship but they did bring tools for farming and building, seeds, animals, cookware and such.  Unfortunately they arrived at the onset of winter in a northern clime and that first winter was so harsh that half of their party perished.  Eventually, unlike a number of previous settlements in North America, they did survive, and the harvest the following year was abundant.  From the fields, both English and Indian, came corn, beans, pumpkins, squash, peas, carrots, cucumbers, lettuce, onions, sweet potatoes, radishes, cabbages, beets, turnips, bread from European grain; and from forest, sea and stream came wild turkeys, ducks and geese, fish, lobster, clams, oysters, deer and wild berries, cranberries, walnuts, chestnuts, acorns. 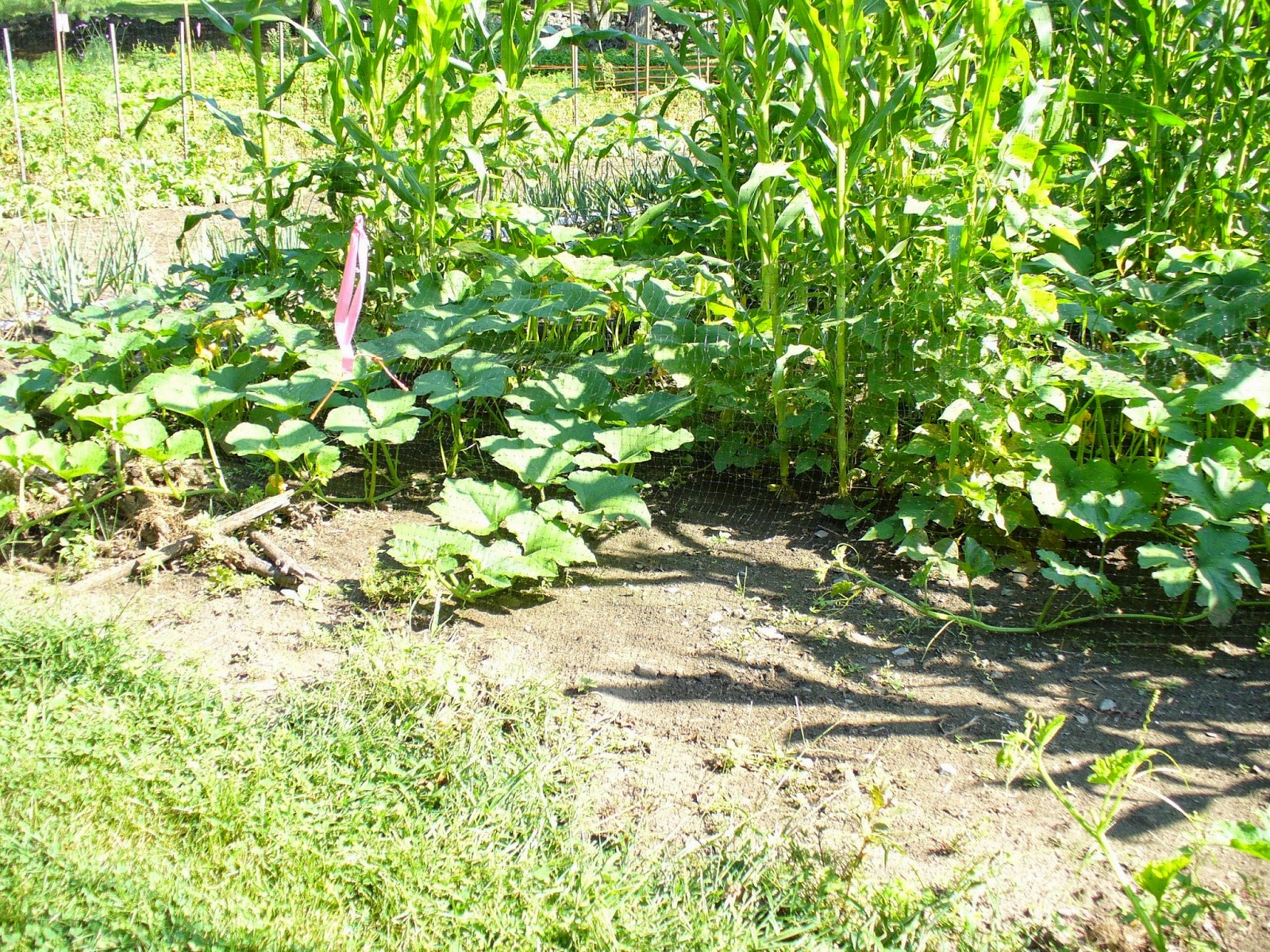 One of my favorite planting methods inherited from the First People is the “Three Sisters” where three vegetables (corn, beans and squash) are planted in a single hill.  The corn serves as a climbing pole for the beans, and the squash provides cover to block weeds and grass and the prickly vines deter animal pest.  The beans provide nitrogen for the corn.  On this one small mound, these three plants produce all the amino acids of a complete protein — tasty and highly nutritious.  The picture to the right is from the garden at the Old Manse in Concord, Massachusetts; one of the early Pilgrim settlements.  Ralph Waldo Emerson lived in that house when he first moved to Concord and there he wrote his first book, Nature.

A mixture of European and American foods were readily adapted to colonial agriculture.  Crops depended upon climate and soil, and growing seasons and soils varied greatly from New England to the Carolinas and from the coast to the mountains inland beyond the fall line.  Those pioneering farmers readily adapted.  Our early economy was founded on grown exports.  Several crops were cultivated primarily for export, such as tobacco and cotton.  Lumber from the endless forests was harvested for shipbuilding and the European market.  Molasses (sweet sorghum) and corn were converted into rum and whiskey, respectively, for both trade and local consumption.  Fish were abundant along the coast and many thousands of tons were salted and shipped to Europe.  We have much to be grateful for from our fruitful land and from the agricultural heritage of two great cultures.


Over the centuries, agriculture has flourished in America.  Our land has provided a rich bounty of foods and a livelihood for generations of families.  Industrialization has had a major impact on our food system.  Climate change is having an even more profound impact both here and around the world.  We are in urgent need to closely examine and correct flaws in the food system.  That starts at home, both in terms of the local community and local foods and, yes, in our own back yards and community gardens.
Posted by Bill Sharp at 9:13 AM 7 comments: